For the character of the same name, see Karl Hoffman.

Karl Hoffman gives Karen Brodine a drugged drink at a children's play area. When she wakes, she is tied to a medical style table and Karl proceeds to inflict various specific injuries on her. Later she is dumped in her own vehicle and Karl calls 9-1-1 as he walks away.

Tom Keen tells Liz that he has a job interview in Lincoln, Nebraska; that day. They decide to talk about their ongoing relationship when he arrives back that evening.

When Liz learns of the attack on Karen she asks Harold Cooper to assign her to the case, since she had pursued the attacker during her time in New York. She also believes, that because this case is important to her, that Red may contact her with assistance. Cooper conditionally approves, depending on the results of her debriefing about the attack on the Post Office.

Liz, Donald Ressler, Aram Mojtabai, and Meera Malik are questioned about the raid, with the questioning being observed by Cooper and Diane Fowler. Malik states that verbal interrogation is ineffective, wondering why they do not use enhanced interrogation techniques instead.

Liz and Ressler go to meet with Karen's husband and son, where her body is identified.

Raymond Reddington views Luli Zeng's body and has a flashback of her death. He tells Newton Phillips to ensure that he can disperse the ashes, stating that he “wants it done properly”.

Red then tracks down and interrogates the associate of the apple eating man who was watching the Keen house, the paramedic who removed the chip from his neck and the doctor who drugged him prior to Alan Fitch questioning him. After talking to them and finding out that none of them kow anything helpful, he kills them and disposes of them in public areas.

Red calls Liz at home and suggests that she looks at the victims and their families, since he does not know about serial killers, but does know about torture.

Back at the Post Office Liz checks the records and realizes that all of the injuries inflicted on Karen Brodine had been suffered by her son. She tells Ressler and Meera her theory about the killer, and that she has heard from Red. When Meera asks if she has told Cooper, Liz says she has not. Ressler decides that they need to interview Karen's son. Cooper pulls Meera aside and tells her that she has been cleared by the investigative team. Meera tells Cooper that Liz has been in contact with Red.

After having dealt with those who assaulted his person, Red now goes after the sponsor of the raid on the Post Office. First he questions a club owner called Fyodor, whom he kills after learning that the banker was called Henry Krueger.

Ressler and Liz question Michael, Karen's son and he tells them that his injuries were caused by his mother.

Red talks to Henry and demands his records for Anslo Garrick's operation.

Meera shows Cooper a money trail report that names Louis Coogan as the mole. The picture, however, is of Aram. When the FBI SWAT team storm Aram's residence they find it deserted.

Aram is brought hooded into a room, where the hood is removed and Red is sitting opposite him. Red tells Aram to steal 5,000,000 dollars from an account and place it in one of his accounts. Red tells him to make the theft untraceable and that if he has not completed the task by the time Red has stripped, cleaned, and reassembled his gun he will shoot him. Aram completes the task, then explains the Red how it was done, Red tells him that he is innocent, when Aram asks what Red means, Red explains that a payment for the raid on The Post Office was made to a Louis Coogan, an alias for Aram. Red says that Aram is too intelligent to have accepted payment in such an easily traceable form, so he will find someone else and kill them.

Karl attends a support group for abusers and their victims and talks to George, the abusive husband of Melissa, a woman he treated earlier in his job as a nurse in an emergency room.

Red returns to see Henry, and this time shoots him in the leg, and threatens to have him killed in Papua New Guinea, unless he tells him who really was paid for the attack on the Post Office, Henry tells Red the name Newton Phillips, and Red leaves Henry's home.

Karl has captured George and strapped him to his medical table, where he forces his mother (who abused him as a child) to watch as he starts to torture George.

Liz briefs the team on her findings about the Good Samaritan, how all the victims had the same injuries as members of their families and that the only link is that Karl Hoffman was the attending nurse.

Liz and Ressler check Karl's latest place of work where they discover that Melissa is the only person treated by Karl recently who was being abused. When they question Melissa they learn that her husband George is attending a support group. They question the group facilitator and learn that Karl and George left together.

Liz and Ressler go to Karl's childhood home where Liz discovers Karl about to give George a concussion. She orders him to stop and when he goes to attack his mother she shoots him dead.

Liz visits George in hospital and with Melissa listening tells him that if he touches Melissa again, she will finish what Karl started.

Aram returns to the Post Office with the proof of his innocence supplied by Red.

Fowler meets with Fitch and refuses to give him the name of the mole responsible for the attack on The Post Office, merely saying that the mole has been neutralized.

At her home, Liz thinks Tom has come home and tells him, she is not ready to have another fight with him about moving to Nebraska. To her surprise, the visitor is Red and he tells her that there is still a mole in the FBI, as the leak in his organization did not have the required level of knowledge to plan the raid. He says he has brought her the next name on The Blacklist.

WHO IS THE MOLE? - The entire FBI team is under investigation as internal affairs tries to find the mole. Elsewhere, Red is missing and conducts his own investigation into who betrayed him. Meanwhile, a serial killer from Liz’s past, “The Good Samaritan” strikes again. Liz is allowed to join the hunt for the killer as Cooper knows Red will likely reach out to help knowing how much this unsolved case means to Liz. 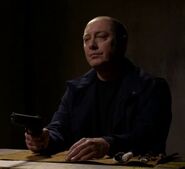