The episode opens in Prague, Czech Republic where a politician working for Reddington enters a limo and is surprised that the chauffeur is English. The politician, Emil Dusek, complains that it’s hot and the chauffeur offers him some water, which he drinks and then falls unconscious. The politician wakes to find himself in a hotel room next to the dead body of a male escort. A television plays the breaking news of the murder and shows Mr. Dusek announcing his withdrawal from the senate to defend himself as the chauffeur watches and smiles.

Raymond Reddington is seen meeting with Niko Demakis about the Prague matter, sharing that he suspects it’s the work of the Kingmaker. Red is interested in who retained the Kingmaker to which Niko replies that he knows and that it’s the same person who has been placing a siege on Red’s interests. He says that Red’s “friends” are whispering and they remain loyal for now, but they won’t forever. Red tells Niko to relay this message: “Shut the hell up”.

Elizabeth Keen views the photos that Tom Keen had led her to, which show Red at the hospital where her adoptive father Sam Scott had died. Liz shares the photos with Donald Ressler and they puzzle it out. Liz meets Red and asks him where Tom is. He says Tom is in New York and that her people are watching him and then steers her toward the more urgent matter of The Kingmaker, a notorious political strategist who is responsible for the rise and fall of many prominent politicians through scandal, exploitation, and assassination. Red wants the FBI to arrest him because of the trouble he recently caused in Prague. Liz asks to be filled in on Tom’s movements, but Red just tells her to get after the Kingmaker.

We cut to the Kingmaker meeting a man named Patrick Chandler on a bridge. They are planning some sort of car accident off the bridge. Patrick seems nervous and asks for details about what’s going to happen, so the Kingmaker reminds him of the bold life he has requested and that it would be a shame if he didn’t go through with the plan. Patrick says that he will be on the bridge at 4 pm.

Back at the Post Office, Meera Malik and Aram Mojtabai help narrow down the list of suspects to find the Kingmaker and learn he is in New York. Ressler and Liz bust into his hotel room, but only find a nice couple. The Kingmaker cloned his credit cards and they realize this was just his entry point and he could be anywhere by now.

Alan Fitch is eating at a nice restaurant when Red marches in to sit at his table. Fitch asks if Red is out of his mind, to which Red says that he doesn’t have the time to follow protocol. He shares that he is under attack and needs help from Fitch and his friends. Fitch asks why he should help, since they aren’t friends or allies. Red says they need each other to survive and then threatens him with some information he possesses that would destroy Fitch’s group saying he keeps it secret, but if the person attacking him gets it, they might not be as discreet. Alan says he doesn’t respond well to threats to which Ray says he just wants to work together.

Patrick is with his wife and daughter getting in a car to drive home. Patrick starts heading for the bridge and claims he is taking the longer route for scenic purposes. The Kingmaker sets the action in motion and a van coming the opposite direction across the bridge crashes into the car sending it into the water. Patrick is able to save his daughter, but not his wife.

Red and Liz watch the news and Red says he thinks the Kingmaker did this to help Patrick, a New York State Assemblyman, get to a higher office. Liz isn’t convinced it’s real and Red says to go investigate the crash site. The team investigates Patrick back at the Post Office. They find a sparkling resume and background, but are confused because he isn’t running for anything and ask why he would murder his wife. Liz says husbands lie all the time and Ressler notices her attitude. Aram catches Liz and tells her that he had the footage she had asked him to subpoena. It’s footage of the hospital where Sam died, Liz tells him to look for Reddington and they find out he had been there an hour before Sam had died.

Liz and Ressler are at the crash site and Ressler asks Liz what’s really going on with her and Tom. Liz tells him about the fight and Tom leaving. They see the holes at the crash site and go question Patrick at his home who answers a few questions and then won’t talk anymore. The team located the van belonging to Destination Plumbing owned by Aruturo Ruiz and head there. The Kingmaker is already there talking to Arturo who complains that the Kingmaker lied to him and he has to live with killing that woman, but the Kingmaker is mad at Arturo for leaving and kills him.

Meanwhile Fitch meets with his alliance and tries to convince them to help Red, but they don’t seem too interested in that. Fitch calls for a vote to be had. Liz and Ressler reach Arturo’s shop and find him dead. Patrick meets the Kingmaker and says he thinks they should stop. The Kingmaker disagrees and tells him they’re moving on to the next phase.

Red, Liz, and Dembe track down a new lead at Le Claire’s pawnshop where they enter a backroom restaurant filled with people. While they wait for the owner Liz questions Red about his connection to Sam and if he was there on the day Sam died. Red tells Liz he went to say goodbye and then greets Charles, the owner of the establishment. Charles shares that the Kingmaker was there and he is staying at hotel called the Brixton. Liz and Ressler break in and find a breaching plan for a big house belonging to Albert Mitchell, a U.S. Senator. Harold Cooper connects the dots that the Kingmaker means to kill the senator because if he dies in office it would trigger a special election for his seat resulting in Patrick being the front runner.

At the house, alarms go off waking the senator who goes downstairs with his pistol. The Kingmaker is waiting, takes the gun away and then murders the senator just as Liz and Ressler arrive. The Kingmaker attacks Elizabeth and applies a choke hold, before being fatally shot by Ressler. Fitch meets with Red again and says his alliance won’t help and that some members think his threat is a bluff and they should kill him now. Red responds that he will win the war anyway and all that this has led to is Red not being their for Fitch when they need help later. Elizabeth phones Red to inform him about The Kingmaker. Red says he wants 10 minutes with the man to find out who ordered the Prague incident, but Liz tells him that’s not possible because the Kingmaker is dead.

Ressler and Elizabeth arrest Patrick Chandler for conspiracy to commit murder. Liz then gets a call from Aram that Sam was found about 45 minutes to an hour after he had actually died causing her to realize he was there when he did die. Liz meets Red who tells her that he did kill Sam. Elizabeth calls Red a “monster”, and says that she won’t work with him anymore. The episode ends with Liz going to Ressler’s apartment.

THE NEXT TARGET ON THE BLACKLIST CAUSES RED CONCERN – After a Politician in Prague is framed for a murder, Red suspects it’s the work of the Kingmaker – a strategist behind the rise of some of the world’s most powerful politicians. While Red helps Liz and the FBI catch him, Liz uncovers a secret that Red’s been keeping from her. 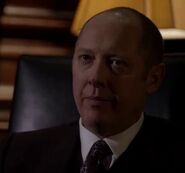 The Blacklist The Kingmaker
Featurette