“The Longevity Initiative” is the seventeenth episode of Season 2 of The Blacklist and the thirty ninth episode overall. It first aired on March 26, 2015 on NBC.

The task force tracks a scientist who abducts disabled patients to conduct experiments on immortality. Now back in Washington, DC, Tom scrambles to save himself from new enemies. 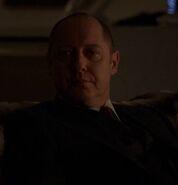