The episode opens with an aerial shot of Changzhou Labor Camp in Jiangsu, China. Inside the camp, women are receiving shots from nurses working for the World Health Organization (WHO) while being closely watched by Chinese soldiers. Some of the “nurses” are clearly up to something, and the shot to one of the prisoners results in her falling over. The nurses insist that she be taken to a hospital because her heart has stopped, and the soldiers reluctantly let her leave by ambulance. The Chinese commander reviews the video recordings and realizes that the prisoner was deliberately injured. He orders a lockdown, but the prisoner has been transferred and revived in another vehicle and told “You will be in America by morning. We are taking you to Washington D.C.”

The 4 Serbian Pavlovich brothers are in Kraljevo, Serbia; oiling their weapons, when they receive a call for a job. “We are going back to DC.” An offer from Hezbollah will have to be delayed.

While getting ready for work, Tom Keen is pumping Elizabeth Keen for information about the Jolene Parker investigation. She tells him that the police believe that Jolene was murdered. Whilst talking, she is replacing the battery in his keychain with a tracking device. He leaves for school with it.

Liz says to Raymond Reddington, “He [Tom] knows something is up. I can feel it; I know him”. When she tells him that she thinks Tom killed Jolene, Red says that he already knew and did not tell her for fear that the knowledge would change her behavior towards Tom. They speculate on why Tom would kill Jolene, but it is clear that about the only thing they know for sure is that Tom and Jolene worked for the same organization. Then Red says, “But Tom is not the reason I'm here, the Pavlovich Brothers are back in town.”

At the Post Office we learn that the Pavlovich brothers are the same people that previously grabbed the general's daughter Beth Ryker in “Pilot”, a “snatch and grab” extraction team with no political agenda, whom Reddington says now have a contract in the US to come after Xiaoping Li, the Chinese prisoner whom the CIA, posing as WHO nurses, had extracted from a labor camp 18 hours ago because she was an immunologist specializing in diseases who 4 months ago signalled the CIA with a willingness to disclose secrets about a secret Chinese weapons program and then was imprisoned 1 month ago. When the FBI figures out the the Pavlovich brothers are going to attempt an interception, they try to change the travel route, but the brothers get the scientist anyway by attacking and hijacking the CIA helicopter.

Back at the Post Office, Donald Ressler says that the helicopter was found burning. He asks Meera Malik why the Director of National Intelligence called him. Meera says that the Chinese prisoner was working on Whitefog, a germ warfare program, and had access to the designs, which if obtained by the CIA would represent “the biggest intelligence coup in a decade.”

Red calls Liz, knowing already that the brothers have gotten the scientist and telling her that Tom called in sick for work today. Liz leaves, telling her co-workers that she is going to meet Red for a lead in the Chinese case, but clearly more interested in information about Tom. She later meets Red and observes Tom entering the National Archives from inside a car. When she says that they should follow him, Reddington subtly points out many of his own people who are shadowing Tom Keen, telling Liz that they “work for her now”.

However, Elizabeth, still rattled emotionally by Tom's betrayal, rushes from the car to follow Tom herself, much to the annnoyance of Red. She sees Tom standing next to a man holding a green package meant for Tom. However, because Tom spots a security camera nearby, he tells the man not to pass him the package. He looks over his shoulder just in time to glimpse Liz, but she has already withdrawn back into hiding.

Later, when Liz reaches home, Tom tells her that he has cooked for the both of them. When he mentions having seen Liz at the National Archives, she refutes him by saying that she was at the office all day. Tom however, now knows that Liz has figured out who he truly is, and under the pretense of walking their dog, Tom escapes for good.

Later, Tom is seen walking down a street. He calls his bank contact and asks for an evac route. He tells his handler that “she knows”.

Back home, an upset Elizabeth Keen is talking to Red about her husband leaving. To which Raymond Reddington responds that her husband never existed in the first place. Liz reveals how truly upset she is about Tom's betrayal, having been married to him for 2 years. Red explains to Lizzie that to Tom, it was just business, and that in order to get to the bottom of her situation, she needs to be more patient and less emotional. Liz angrily refuses to be patient and says that she is going to hunt Tom down with or without Reddington's help.

THE PAVLOVICH BROTHERS ARE BACK IN TOWN – The Pavlovich brothers specialize in abductions of high value targets and according to Red, they are planning their next hit. While the team tries to protect the next target, Red has a job of his own for the Pavlovich Brothers. Elsewhere, Liz patiently tries to uncover the truth about Tom.

Slanders on the FBI and CIA[] 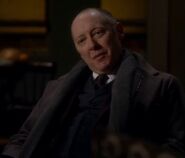