Jeremy Crutchley
Thelonious Prackett is a member of The Blacklist.

Thelonious Prackett was the leader and the master of ceremonies for Les Fleurs Du Mal, a secret society of upper class thrill seekers that engaged in great feats of violence and murder in order eliminate their boredom. During the meetings of Les Fleurs Du Mal, they would randomly select 1 of their members to take part in any sort of deadly games where the selected player would race against time to save his or her own life or be killed trying, to the amusement of the other members. The death trap always had a low percentage of survival as it would not have been a game without the probability. Under Thelonious‘s supervision, Les Fleurs Du Mal was responsible for at least 6 murders. 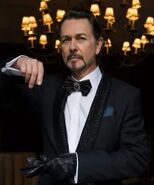