The Harbinger of Sin

The Wraith is a character in “The Blacklist: Conspiracy”.

The Wraith is someone from Raymond Reddington's past, however Reddington has no knowledge of anyone that goes by that name.

Before John Doe killed himself, he revealed that the Invisible Hand was contracted by the Wraith to kidnap Stephen Chen in order to see how the task force operated.

After Clark Peters was arrested, it was revealed that he was hired by the Wraith to kill Emma Torres and expose her as a double agent.

During the investigation it is also revealed that Ruth Kruger, an illegal weapons courier that does business with Red, was in business with Clark Peters and the Wraith.

While unidentified by the FBI, the Wraith was the man that detonated the bomb that blew up the hospital that Emma Torres was in.

During the investigation, a bomb was discovered on Red's plane. The bomb was disarmed and a photo of Red was found with a poem signed by the Wraith. It was later discovered that the bomb had been made by Sakura Endo, a member of the Japanese Intelligence Agency and an associate of Reddington's.

Sakura explained that the Wraith had kidnapped her sister and would kill her if she didn't follow his instructions. She asked Red if he was going to kill her for betraying him. Red replied that he wasn't going to, the Wraith would kill her when he found out she confessed to Red.

At the end of the investigation, it is revealed that the Wraith manipulated Gabriela Espinoza into going on a killing spree and was the one that sent Red the note that started the investigation.

At the end of the case, the Wraith called the agent and threatened that he was coming after Reddington and the agent would be a casualty.

Near the end of the case, Fiona Winters told the FBI that Marcus Tucker was working with the Wraith.

After Tucker was arrested, he told the FBI that he was receiving shipments of chemicals from over seas for the Wraith. 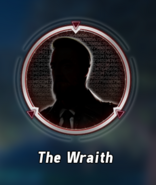 Wraith
Add a photo to this gallery
Retrieved from "https://the-blacklist.fandom.com/wiki/Wraith?oldid=27933"
Community content is available under CC-BY-SA unless otherwise noted.