A man is assassinated on the streets of Shanghai, his computer is stolen, and his hand is cut off. Using the hand, the computer is accessed, but a message cannot be decoded by the computer, so the order is given: Call Raymond Reddington.

Meanwhile in Washington Elizabeth Keen test fires the gun found in the box into a bucket of water and some telephone directories. Their friend Ellie arrives to take Tom Keen to his physiotherapy after breakfast, while Liz leaves for work. On the way in she arranges for the bullet and cartridge to be ballistically tested to see if they were involved in any crimes.

Red is playing solo chess in a park when a man approaches him and tells him he has a message from Wujing. Red tells him that his usual contractor is unavailable, he is to speak to Luli Zeng about his intended replacement and if that is OK they will proceed as normal.

Red meets Liz at his Hatter, and tells her that the Chinese recently killed a CIA agent in the hope that his computer could decode a message they has intercepted, but it could not, so they have called him. Red tells her that his client is Wujing a legendary Chinese agent who specializes in killing the agents of other countries. Liz thinks that message probably contains the name of another American agent and refuses to help. Red says that if he didn't decode the message someone else would, and besides he has already set up her cover ID. Liz eventually agrees to help. Red tells the agents that a small radio station, WDCJ, 5 miles away was purchased by the Chinese Government and is where Wujung has his US base. Red says that they have to use the real message as the Chinese may not know what is in the message, but they know what isn't.

After Ellie and Tom have left for Tom's physiotherapy session a team of men break into the house and install cameras and other equipment, supervised from outside by a man eating an apple.

Liz is given a decryption box and a remote mirroring program on a USB key, to transmit the message to the monitoring agents once it has been decoded and a fake nicotine patch which is a location transmitter.

When they arrive at the radio station they are checked for bugs and Red admits to his DARPA approved chip, but is permitted entry and told that it won't work. They are put into an elevator/lift and it descends to an underground bunker. Outside the monitoring team lose contact, and fearful of either betrayal or peril decide to put the armed response unit onto stand by. Inside Wujing introduces his new cryptographer Jin Sun. As there is no transmission from the bunker Red distracts everyone by pointing out one of the FBI surveillance vehicles while Liz plugs her USB key into Jin's computer. The message is soon decoded and the person involved is not an agent, but an architect, Henry Cho, who had helped the CIA.

As Liz and Red attempt to leave, alarms sound and the bunker is locked down. Wujing states that any connection to a Federal site is verified, and if found to be unauthorised then the alarm sounds. His security system has detected that the contact came from Jin Sun's computer and he proceeds to beat him. When he smashes Sun's computer in front of him, Sun notices the USB key Liz inserted. Before he can tell Wujing, Red shoots him dead, telling Wujing that still wants to leave. Wujing agrees and they leave by another exit to avoid the FBI.

Meanwhile Wujing's assassins reach Henry's location, but he has been warned to hide by Meera. Donald Ressler and Meera Malik arrive shortly after the assassins and Ressler manages to throw one of the building and, after a long fight, subdue a second. Meera shoots the third one just before he could kill Henry.

Wujing is making his escape by car with Red and Liz. Red asks for them to be dropped off, and as she leaves the car Liz puts her tracking patch on the side of the vehicle, so the FBI SWAT team easily intercept them and arrest Wujing a few minutes later.

Liz asks Red “why her” and he says that it is because of her father. When she asks if Red knew her father, he says that the answer is complicated, and says no more.

Liz receives the ballistic report, but it is so heavily redacted it is almost worthless.

Back at the Post Office, Ressler goes into Harold Cooper's office and tells him that he had placed a flag on all Liz's requests. Ressler gives him the unredacted version of the report she requested. Cooper remarks that the Secretary of Homeland Security is to be included in any briefings about this homicide.

Liz returns home to join Tom's welcome home party, where unknown to her they are being watched by the Apple Eating Man.

The FBI is on the hunt for a high-ranking Chinese spy, Wujing which Red claims has hired him to help decode a classified CIA transmission. Liz, posing as an FBI cryptographer goes with Red to decode the message while protecting US government secrets. Meanwhile, Liz proactively investigates Tom.

Slanders on the FBI, CIA, and MSS[] 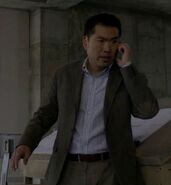 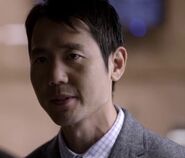 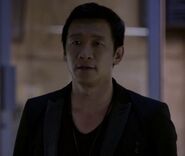 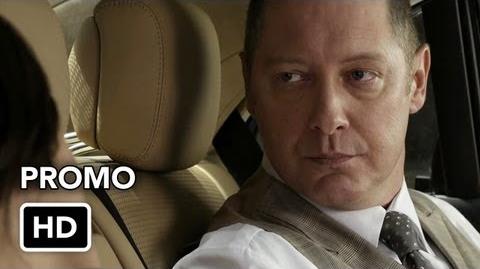