Scottie Thompson
Zoe D'Antonio is a character in NBC's The Blacklist.

Born in the former Soviet Union, Zoe was the daughter of KGB officer Milos Kirchoff. When she fell in love with a dissident, she faced threats of imprisonment. Her father used his connections to help her escape, but was put in a gulag himself. While he was there, an American intelligence officer named Alan Fitch helped Zoe flee the country and assume a new identity in the United States and convinced her father that Raymond Reddington had killed her to cover their tracks.

Raymond Reddington suspected that Milos' daughter is alive. Using a photograph of her as a child that he stole from Stanley R. Kornish's photo book of his victims he contacts Glen Carter to help find her. Red was able to find her living under her alias, Zoe. He and Dembe Zuma watch her from afar.

Red pretends to leave his hat on a chair while leaving Zoe's food truck. Zoe notices and returns the hat to Red, and he introduces himself as Kenneth. After a brief conversation, he continues on his way.

Red bonds with Zoe who tells him things about her father that even he didn't know. Apologizing for his actions, Red and Dembe bring her to be reunited with Milos.

Red asks Zoe to set up a meeting with her father, who has gone underground. Zoe does so, arranging a dinner with Milos where she gives him up to Red in exchange for a new identity to start fresh. 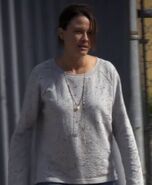